History of the Department Building

While the physical plant of the Department was almost within the same building as it was for twenty years, efficient use of space provided for an office for the Commissioner and the Chief of Police, an officer for the patrol Lieutenant and Sergeants, a reception area containing the telephone switchboard and radio communication facilities, a locker room, and an identification room for fingerprinting and mug shot photography. The eleven unit cell block of 1938 was still in use and a small room was assigned to the parking meter detail. The Detective Bureau was commanded by a Captain with a lieutenant, two corporals and three detectives, two of which comprised the Juvenile Bureau. A darkroom facility, fingerprint and photo files, crime reports and criminal records were all part of the Detective Bureau. Specialized equipment such as "walkie-talkie" radios, a power megaphone, riot and tear gas guns, binoculars, cameras, and fingerprint equipment were available within the bureau for general use of the Department as the necessity for these items arose. 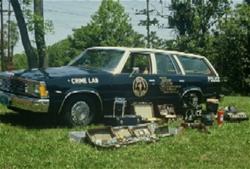 One of the notable changes during this time period included remodeling of Police Headquarters in 1938. The few small changes included enlargement of rooms and the four cells, all of which were heated by a pot-bellied stove. Central heating and an eleven-unit cell block were added. During this period of remodeling the force operated out of the Anne Arundel County Jail located on Calvert Street.

In 1972 the Department moved into its present headquarters on Taylor Avenue (Small Pox Hill). The new headquarters included many state of the art features such as bullet resistant windows, TV monitored cell blocks, juvenile holding cells, and parking areas with time controlled lights. Motorola was the builder of the radio system, featuring two frequencies, monitors for the State and County police, three work stations and tape monitoring of all radio and telephone channels. New walkie-talkies were part of the new radio system. Along with the new station came a change in the uniform. The Department's new uniform was blue in color with a rounded hat. Newly designed badges and hat pieces were also part of the new uniform.

On September 12, 1994 the headquarters building on Taylor Avenue was dedicated in the memory of the late Chief Anthony Howes.

On September 21, 2004 the Department held a ground breaking for the new addition to the Police Department headquarters building. The new addition doubled the size of the existing building to bring it into the 21st century. The old headquarters was renovated and updated. The new addition/renovation includes a state of the art holding facility with a drive in sally port area to help handle prisoner processing. The holding facility is equipped with audio and video monitoring systems as well as panic alarms which are connected to the Communications Center. The new addition/renovation includes additional office space, additional storage space as well as locker rooms and shower area for both male and female employees. The renovations included a parking deck for additional parking. The new building includes an Emergency Operations Center, which can operate as a stand-alone facility.