The City of Annapolis developed the Clay Street Community Legacy Plan, an update of the Clay Street Revitalization Plan, through extensive discussions with the neighborhood residents and organizations working in the community. The plan focuses on 4 goals: 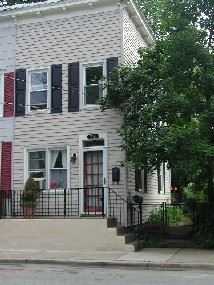 Beginning with the first goal of improving housing conditions, the City improved the exteriors of 43 owner-occupied units and made interior improvements to 10 of the units. The City worked with its partners, Homes for America and Habitat for Humanity, which renovated 15 properties using other public and private funds. Most renovated properties were vacant or former rentals. Besides public investment, the private sector renovated 24 buildings. Over 75 privately owned single-family residences have been improved since the City began its revitalization efforts.

Included in the above statistics is the renovation of Town Pines Court. The City was awarded $225,000 to improve Town Pines Court. This 22-unit townhouse development was in dire need of improvement. The City also used the funds to repave the parking lot, complete facade improvements, landscape with new trees, flowers, and fencing, and install a new community sign. The Town Pines Court Homeowners Association contributed to the project by making a cash contribution, replacing their lighting with street lights that match the street lights installed by the City on West Washington Street and hiring a maintenance company to maintain the improvements.

The Housing Authority of the City of Annapolis (HACA) partnered with Pennrose Development to improve its housing conditions and create home ownership opportunities. They demolished 164 units and rebuilt 174 units of Obery Court and College Creek Terrace. As part of that redevelopment, the City received $225,000 in Community Legacy funds to help with the demolition.

Now that redevelopment is complete, there are 174 affordable rental units privately managed and affordable to low- and moderate-income households. These 174 units comprised over 50% of neighborhood's public housing units.

In addition, Habitat constructed 10 new units on land provided by HACA. The City's FY 2008 Community Legacy application supported this project by providing $175,000 to help HACA demolish public housing units to make way for the 10 new homeownership units. In addition to Community Legacy funds, the City contributed Community Development Block Grant funds ($55,000) to help the new Habitat families with closing costs and HOME funds ($250,000) to help the families with their mortgages.

The old "Butterworth" building, purchased by the Bowman Community Development Corporation (BCDC), will be demolished to make way for 6 new rental units for veterans. The City received $100,000 from the Community Legacy Program to demolish the building. BCDC has applied for Partnership Rental Housing funds to construct the new units. BCDC hopes to complete the project in the fall 2017.

Community Legacy and City funds also have been used to revitalize the community core. The City installed a new kiosk, brick crosswalks, streetlights, and flower baskets on West and West Washington Streets as part of the Gateway project. The kiosk explains the history of the Old Fourth Ward. Moreover, Anne Arundel County has installed flower boxes in the Whitmore Garage to soften the facade and make the building more visually appealing. The City also rehabilitated the Stanton Center and installed the Northwest Street Park.

To improve public safety, neighborhood residents formed the Clay Street Public Safety Team in October 2002. This group successfully revived the Neighborhood Watch program, and executed the recommendations contained in the Clay Street Community Safety Plan developed by the Neighborhood Design Center. The team meets at 6 a.m. on the third Thursday of each month at the Stanton Center.

Lastly, to strengthen community leadership, the City helped Town Pines Court residents reactivate their Homeowners Association. Since then, the group submitted the revival papers, elected a board of directors and officers, and developed by-laws and parking rules. The Board meets on the third Monday of every month at the Stanton Center.