This is a draft map of priority natural resources on the Crystal Spring property produced by the Annapolis Environmental Commission (AEC). They are placed in three categories:

This includes much of the highest quality priority forest (although not all of it), most of the wetlands (although not all of them), and the drainage systems (streams, swales, wetlands, headwaters, and adjacent slopes and buffers) into Crab Creek. It also includes the forested vernal pool and corridors linking offsite forest, as recognized in a broad-scale sense by Anne Arundel County. See forested wetland photo from this area (March 19, 2011).

This includes the rest of the priority natural resources on site, including most of the rest of the contiguous forest, the grassy vernal pool (see photo of frog eggs in this pool, also from March 19, 2011), and the drainage to the forested vernal pool. AEC would prefer that these areas also be retained intact, but recognizes this would make the development project impossible, and places it at a lower priority. AEC believes that any disruption of ecosystem functions and services caused by clearing and paving these areas should be mitigated.

These areas, if reforested, would improve forest connectivity and contiguity and help protect Crab Creek and the South River.

Based on scientific literature, AEC believes that any small fragments of forest retained but surrounded by development and roads are not viable and have little value compared to current site conditions. The AEC believes that all conservation and restoration areas should be placed in conservation easements for perpetuity, to be held by the City of Annapolis, Maryland Environmental Trust, or Scenic Rivers Land Trust. These easements should be worded to exclude disruptions like the building of roads through them. 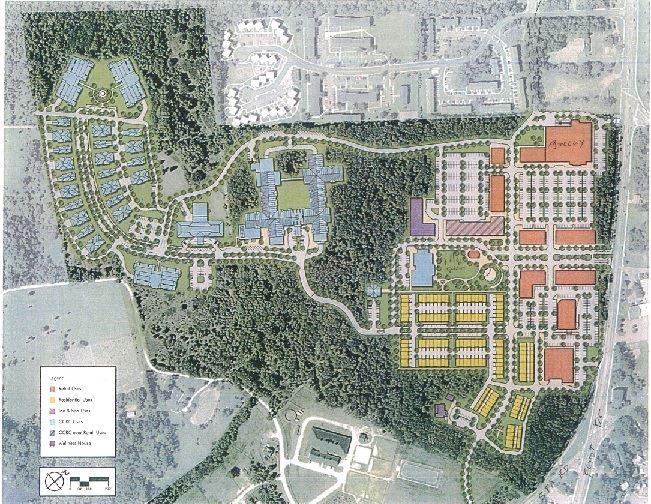 This is an AEC letter sent to the DNEP department head in response to the Forest Stand Delineation submitted by the Crystal Spring developers.

AEC believes the FSD should be submitted by the consultant, and city comments should go directly to the consultant, without the intervention of the developer's legal office. This should be entirely a technical exercise that objectively and accurately identifies the natural resources on site.

AEC supports functional wetland and stream buffers rather than the legal minimum of 25 feet, which is insufficient to protect against altered hydrology, increased sediment and pollutant input, windthrow, increased solar radiation, invasive species, songbird predators, and other edge effects. AEC requests a neutral, third-party site analysis that delineates buffers that will actually protect the wetlands and drainages from negative impacts, and additional measures needed to protect existing hydrology.

AEC agrees with DNEP's letter of September 13, 2012: "With the exception of physically isolated stands, the entire site is considered a contiguous forest per Natural Resource Article 5-1607 c (ii): ‘Contiguous forest that connects the largest undeveloped or most vegetated tracts of land within and adjacent to the site' is a priority for retention and protection. Stand A, part of Stands B, C, D and Stand E are large vegetated tracts within the site, thus a priority for retention, and contiguous to forested tracts off site."

AEC is disappointed that the consultant includes qualifiers in the FSD, arguing against contiguous forest designation, against including 15% steep slopes on the map, against including intermittent streams, against identifying trees between 24-30 inches dbh, etc., but explicitly stating they are including them on the maps because the City has requested they do so. AEC believes the consultant should describe the site as required and requested, without adding language objecting to the process.

The consultant should add that Stand A is also Priority 1 because of its high structural value.

AEC reiterates some of its prior comments that were either ignored or brushed off. For example:

For these reasons, we urge the City of Annapolis to reject the FSD in favor of a revised version that satisfies the above concerns.

A quick note about two other documents placed on DNEP's website this month. The Natural Resources Inventory map, dated February 1, 2012, has "prime tree save areas" that do not align with the FSD, and appear aligned with the development plan rather than the location of the highest quality or most functionally important forest. The NRI should be independent of any development plans, and focus on existing site conditions. Forest stands (see SAF definition cited earlier) are the unit of analysis under the FCA. The Forest Quality Analysis map, dated August 29, 2011, is even more erroneous in its delineation of "stands," delineating and ranking small subsets of the actual stands. AEC assumes that these two documents are obsolete. If instead they are used to make decisions about the property, they should be corrected first.