The Annapolis Fire Department stations are now open to the public and Public Education events including station tours have resumed as of July 6, 2021. 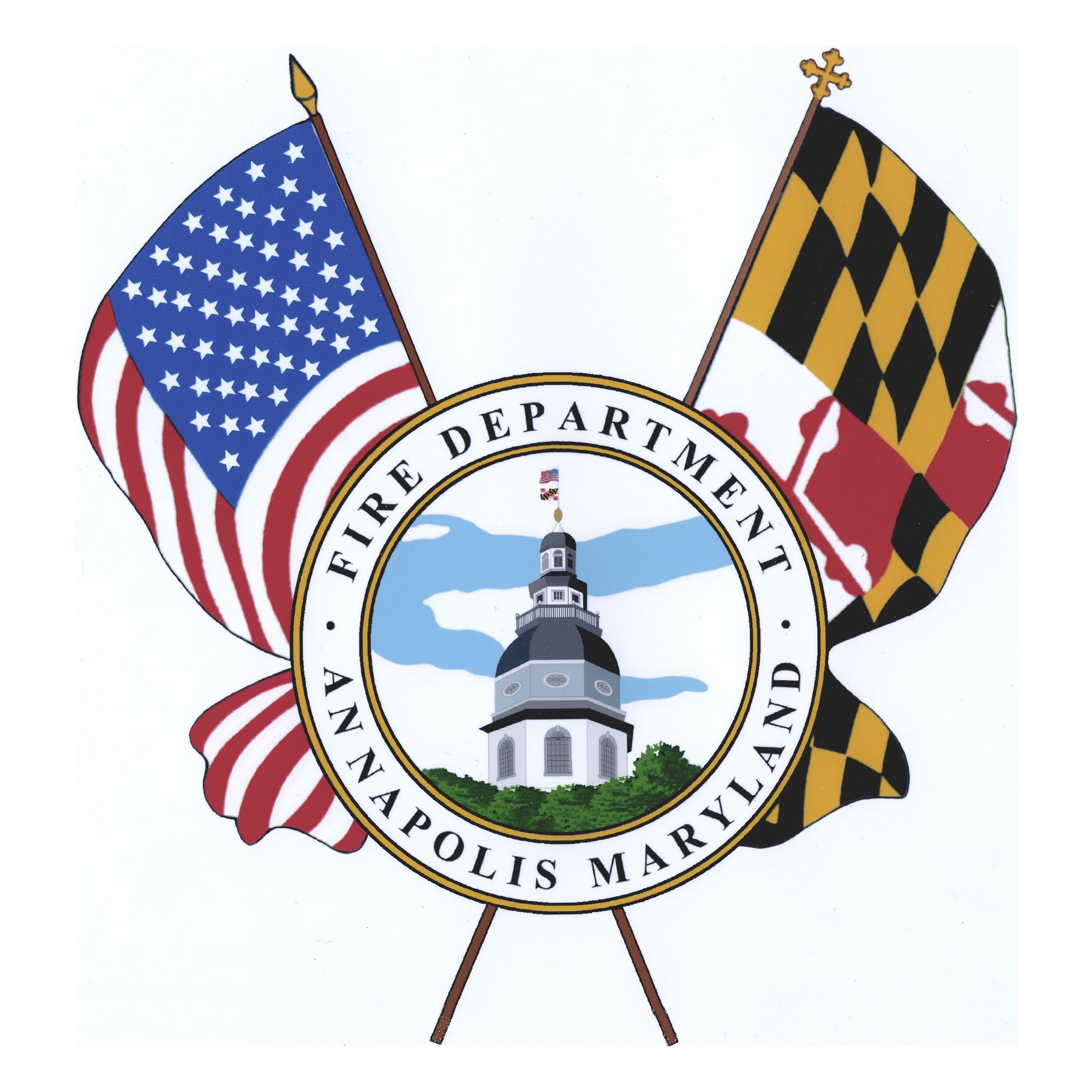 The Annapolis Fire Department (AFD) exists to provide a safe environment for the community by minimizing the impact of fire and injury through public education, quality service, emergency preparedness and an overall culture of safety. 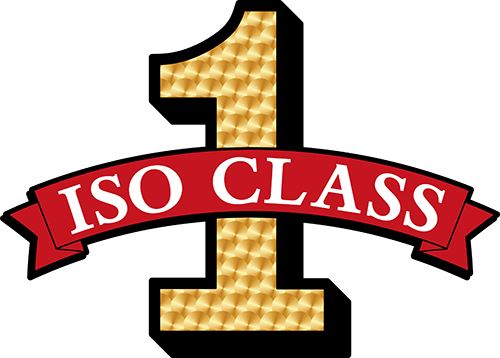 Photos from the 9/11 Remembrance Walk held at the Eastport Memorial Labyrinth on Saturday, September 11, 2021.

Saturday, September 11, 2021, marked the 20th Anniversary of 9/11. We take time to reflect on the first responders that made the ultimate sacrifice at the Fallen Firefighters Memorial located in The City Of Annapolis. We honor and remember those lives that were lost that tragic day. We will NEVER FORGET!

Annapolis to Commemorate 20th Anniversary of Sept. 11 with Proclamation and Ceremony at Firefighters Memorial

ANNAPOLIS, MD (September 7, 2021) – The City of Annapolis will commemorate the 20th anniversary of September 11 with a ceremony at the Maryland Firefighters Memorial on the morning of Saturday, September 11, 2021. The memorial is located at the intersection of Rowe Blvd./Bladen at Calvert Streets. The ceremony will begin at 8:15 a.m. and conclude with a moment of silence at 8:46 a.m., the time the North Tower of the World Trade Center was struck by a hijacked airliner.

Mayor Buckley will read a Proclamation declaring September 11 to be an Annapolis Day of Remembrance and Service. He will be joined by Alderwoman Rhonda Pindell Charles, chair of the City’s Public Safety Committee, the Annapolis Fire Department (AFD) Honor Guard, AFD Chief Douglas Remaley, who will lay a wreath at the conclusion of the program, and the state legislative delegation with Del. Dana Jones making remarks on their behalf.

On September 11, 2021, terrorists hijacked four airliners in a coordinated plot against the United States of America. Two of the hijacked planes struck the World Trade Center, causing the complete destruction of the landmark skyscraper complex. The third plane crashed into the Pentagon. A fourth plane was re-commandeered by brave passengers and crashed in a field in Shanksville, Pennsylvania, never reaching the hijackers’ intended target, likely a Washington, DC landmark (either the White House or the U.S. Capitol). Nearly 3,000 people died in the attacks, including 2,750 people in New York, 184 at the Pentagon and 40 in Pennsylvania as well as the terrorists.

Annapolis firefighters went to New York City in the aftermath of the attacks to assist with rescue and recovery efforts. Mayor Buckley will honor that service and assistance to NYFD in their hour of need.

The public is invited to pay their respects at the commemoration. Attendees should park at Gotts or one of the state garages and walk to the ceremony site. Please be alert that there is a US Naval Academy home football game (vs. Air Force) on Sat., Sept. 11. There may be parking and traffic challenges in and around Navy Stadium as early as 10 a.m. on Sept. 11.

July 13, 2021 was the 63rd anniversary of the line of duty death of Firefighter Alexander C. Johnson of the Rescue Hose Company Number One - Annapolis Fire Department. To commemorate the date, Chief Remaley led personnel from the Annapolis & Anne Arundel County Fire Departments with family members to remember Firefighter Johnson at a memorial service and wreath-laying.

As Chief Remaley promised; we will never forget.

Pictures of a kitchen fire taken on Saturday, May 30, 2020, in Eastport on Creek Drive.

Would you like a tour of the fire station? These men and women are working hard during the COVID-19 shutdown, ensuring that folks who need help get it! Here’s Captain John Muhitch. 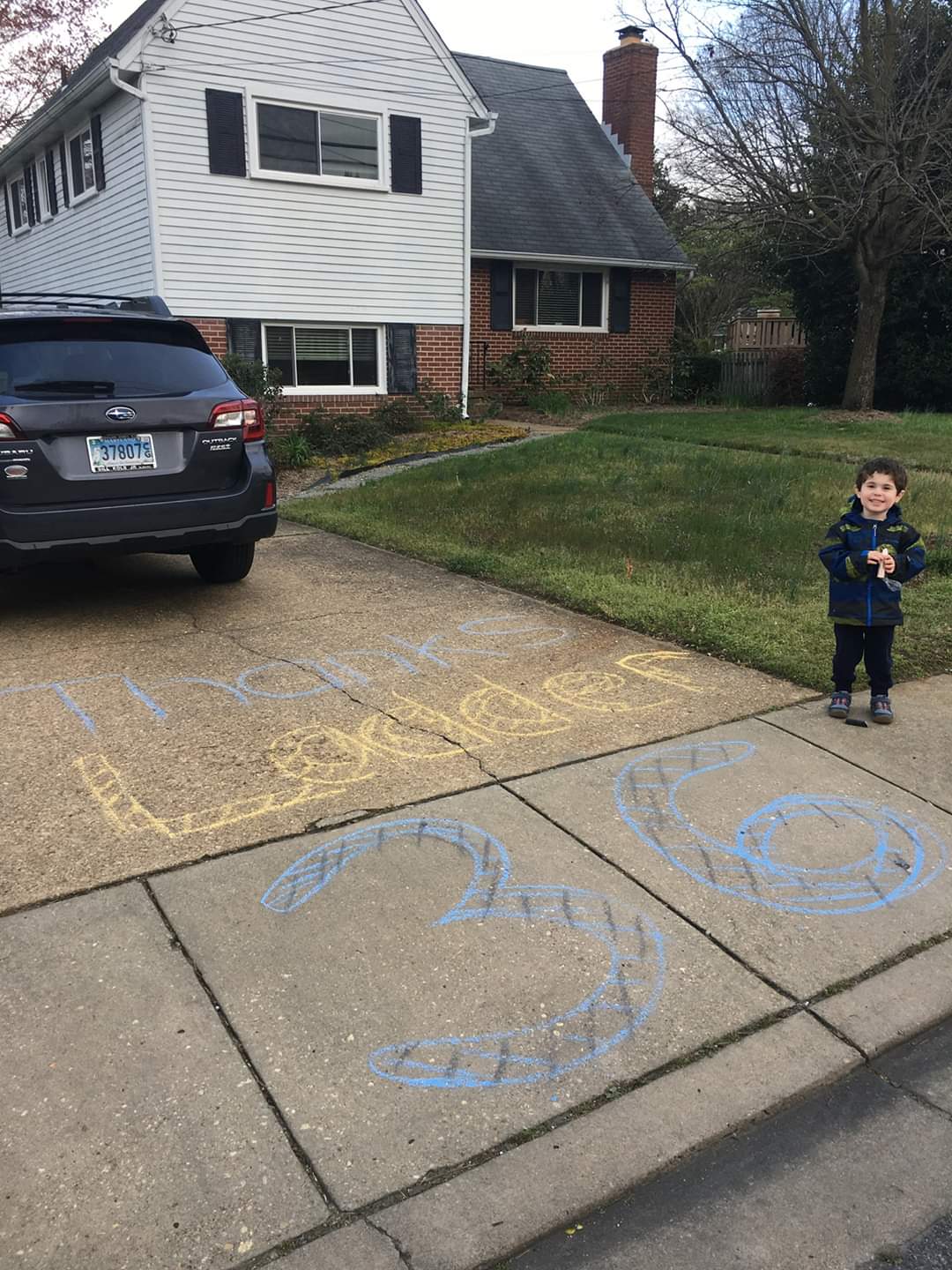 A challenge to Chalk Your Walk was put out in Eastport and Alex did a great job of writing a message in front of his house for the First Responders to see.  Thank you Alex!

Chief Remaley and Deputy Chief Spriggs hosted a Holiday Party for the Fire Dept crew and some guests. 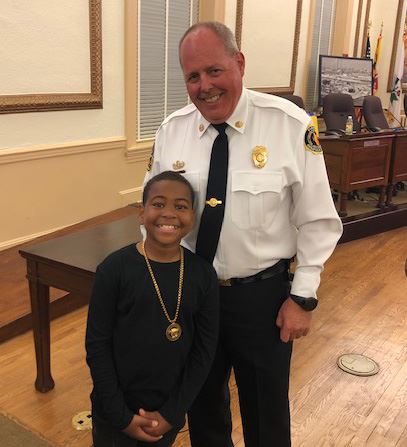 On October 28, Chief Remaley joined in the celebration of “Young Dylan”, aka Dylan Gilmer, an Annapolis Rapper who appeared on Ellen and America’s Got Talent.  Dylan recently announced that he will be starring on a Tyler Perry sitcom.  The motorcade through Annapolis ended at City Hall with a special presentation of a key to the city. 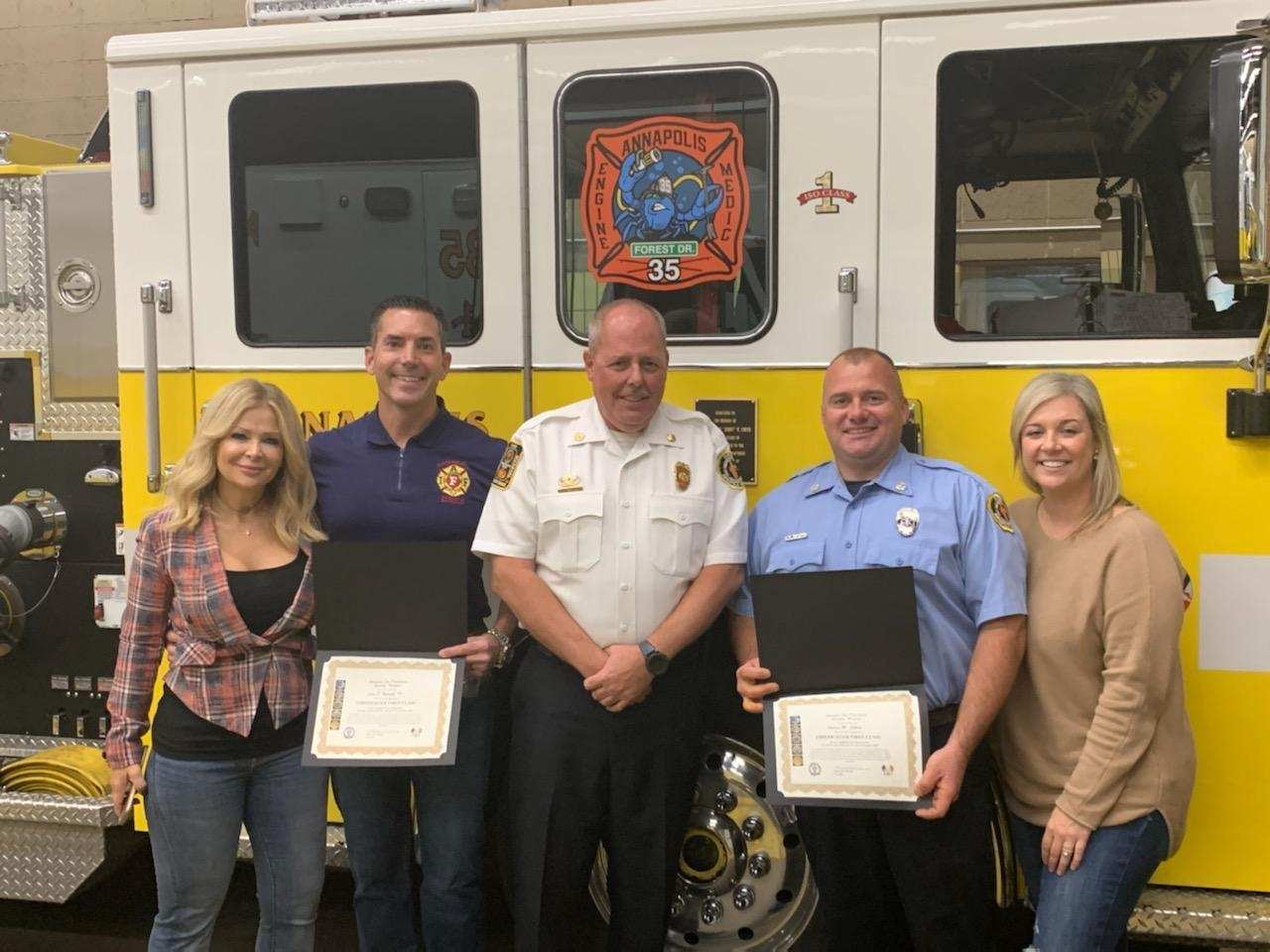 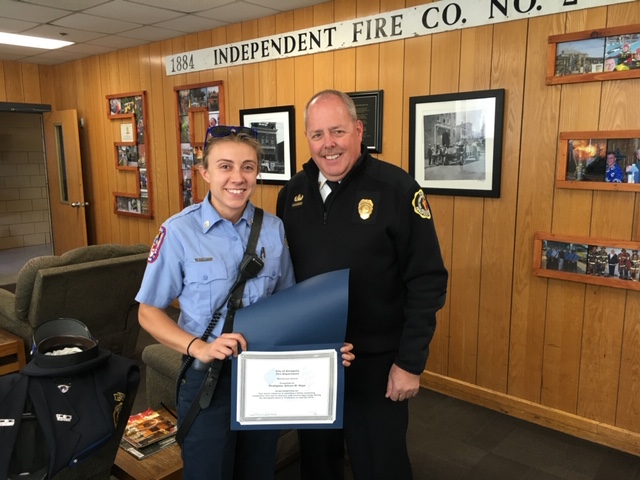 Chief Remaley presented FF Allison Hays with a Meritorious Award for her quick actions in assisting a fellow swim competitor who was in distress with severe leg cramps during the Annapolis Sailors Triathlon in July. 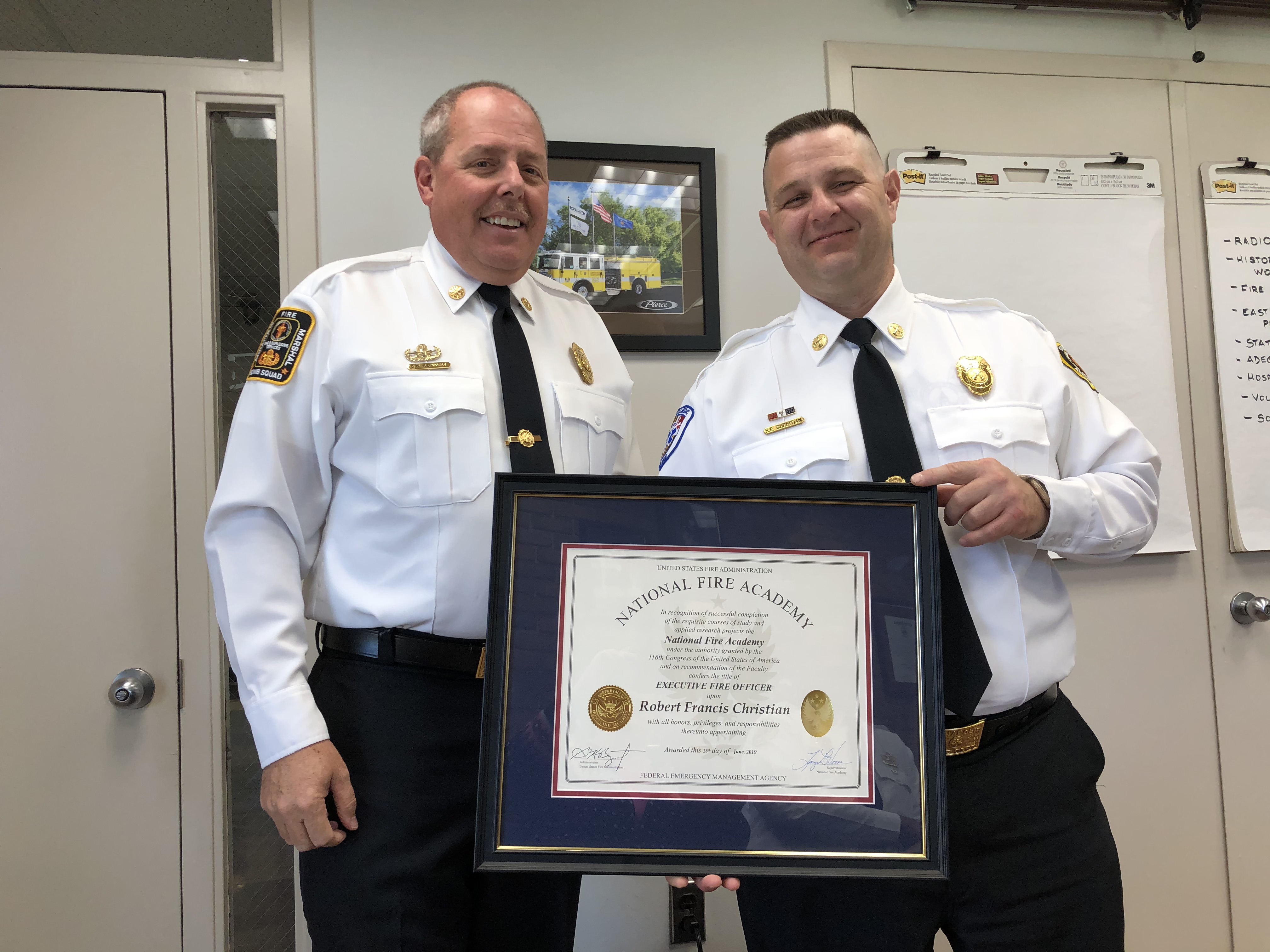 The Annapolis Fire Department took part on October 11, 2019 with other area departments Fire and Police personnel to raise a flag that was a tribute to 9/11. The “Ground Zero Flag” has traveled for eighteen years after flying over Ground Zero as a reminder of the sacrifices made on 9/11/01. The Team that travels with the flag also carries a piece of white marble recovered from Ground Zero that was fashioned into a cross by the recovery workers on site and a log book that documents the missions of the flag and cross around the world. This will be retired on 11/2/21 which will be the 20th Anniversary of when the flag came from Ground Zero. After that they hope the flag, cross and log book will be in a museum for future generations.

Project for the 50 states from 1st grade class at George Long Elementary.  The crew from the Forest Drive Fire Station #35 in Annapolis was more than willing to hold your high five card and take a picture for your project from Maryland! 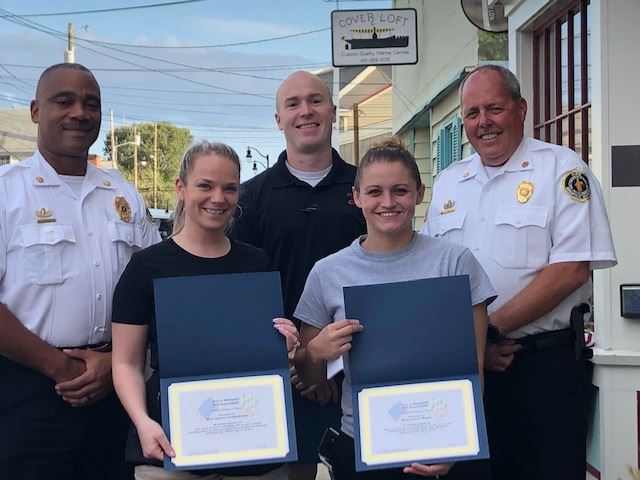 Employees Lauren VanBenCoten, Lauren Beard and Chase Dooley of the Boatyard Bar and Grill are awarded Annapolis Fire Department Citizen Citations of Merit from Chief Remaley and Deputy Chief Spriggs for their quick assistance to a customer who was choking and then required CPR.

On September 24, 2019, personnel from the Annapolis Fire Department joined with approximately 30 representatives from the Hershey Corporation who had a conference in Annapolis. They all walked through the Annapolis Gardens Community giving out candy to children from several communities in Annapolis. A good time was had by all!

Max Shapiro from the Harbormasters Office was awarded for his assistance saving a kayaker and another citizen in the water who were trying to locate another kayaker who had gone underwater.

Several of the Watermark Cruises crew were awarded for their assistance when a citizen went into cardiac arrest while on the dock near them and they began CPR.

Also awarded, but unable to attend were several of the employees at the Boatyard Bar and Grill who assisted a patron who had choked with the Heimlich and then when the patron went into cardiac arrest started CPR.

We will never forget. 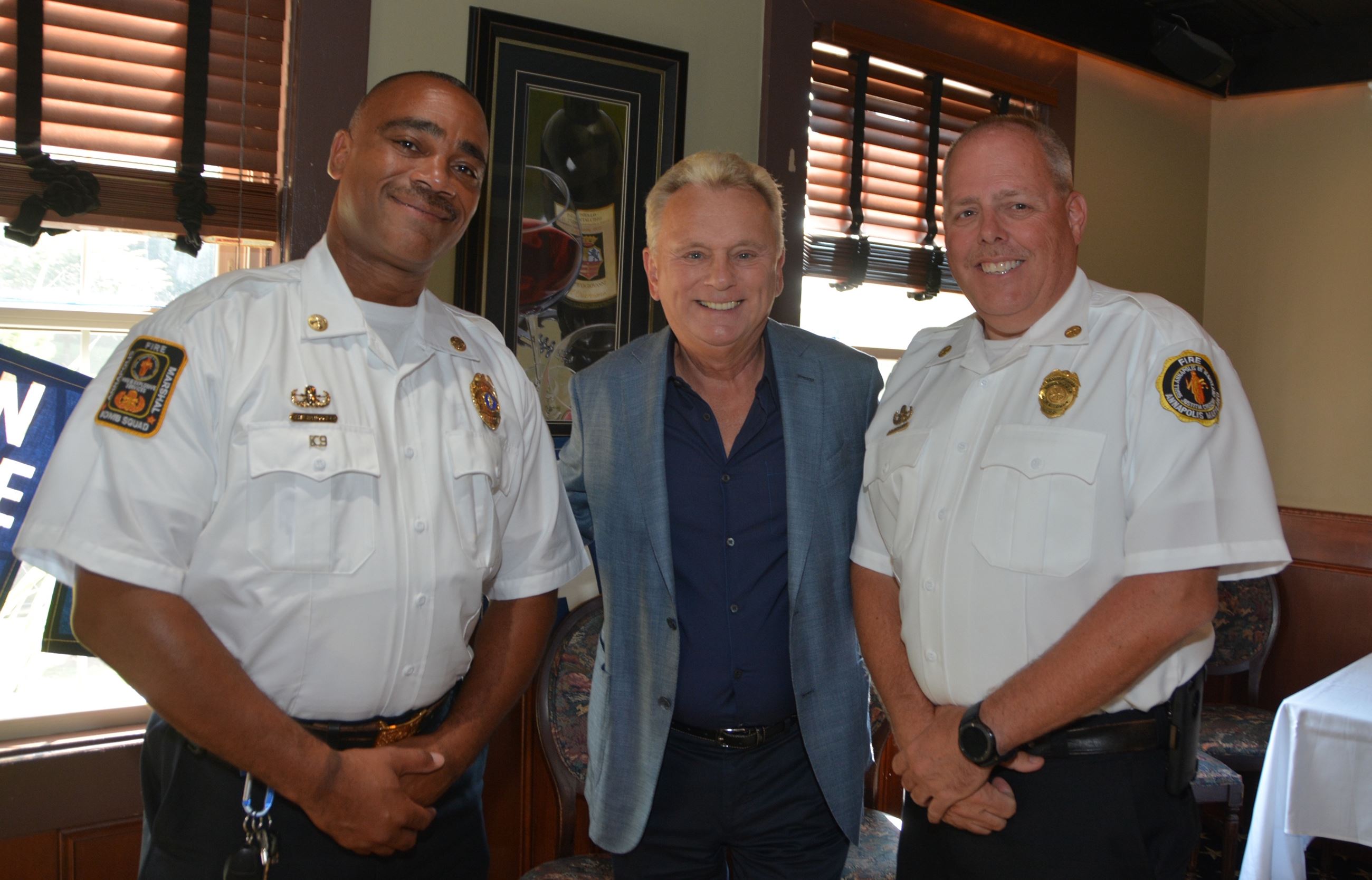 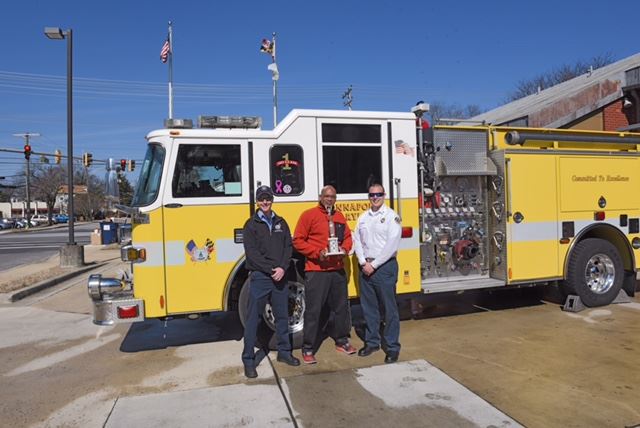 On February 28, 2019, the Annapolis Fire Department team of Firefighter First Class Jonathan Krisman, Firefighter First Class Louis Johnson and Lieutenant Michael Lonergan, Jr. received their trophy as the first winners of the Inaugural Annapolis Sailor's Triathlon which was held July 28, 2018.  This race consisted of a 500 meter swim across the Spa Creek, a 12 mile bicycle course through Annapolis and across the Naval Academy Bridge to Greenbury Point and a 3.8 mile run through the streets of Annapolis and the USNA.  Congratulations to our team! 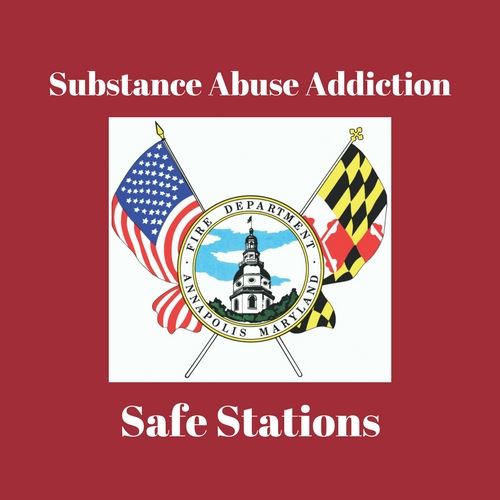