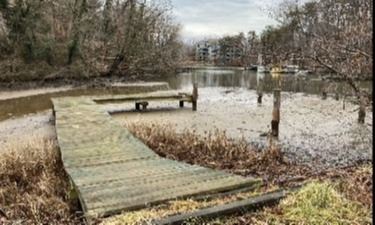 Hawkins Cove is a small body of water tucked behind the Housing Authority of the City of Annapolis (HACA) headquarters in Eastport and adjacent to Truxtun Park. Unfortunately, few passersby pause to enjoy the scenery or make use of the water at this site because it is overgrown with weeds and invasive plants, the dock and bulkhead is in disrepair, and the water quality is impaired by heavy sedimentation.

It is known to many mainly as a cut-through between Eastport and Truxtun Park.

But -- with your help--the City of Annapolis will restore Hawkins Cove to a healthy ecosystem and community amenity.

Hawkins Cove can be improved to create cleaner water, thriving plant life, a resilient shoreline, a usable area free of debris and invasive plants, and a connection to Truxtun Park trails.

To get this project started, the City is conducting community listening sessions during the first half of February and will continue to incorporate community ideas for the Cove as the project is designed during the spring of 2021.

Do you want a quiet place to sit and read a book or share lunch with a friend?

Do you want to see a new pier installed and places where a kayak can be launched and tied up?

Do you want to be able to fish safely in the shallows?

Do you want to be able to play ball on the beach side of the cove?

We want to hear all of your ideas and questions!

WHERE IS HAWKINS COVE? Hawkins Cove is located off Spa Creek in Eastport, directly downhill from the HACA headquarters off Windsor Avenue and in between the Spa Cove Apartments off Primrose Road and the Shearwater Condominiums off Boucher Avenue.    The Truxtun Park skate park and boat ramp are located to the west of Hawkins Cove, just across Primrose Road.

WHO OWNS HAWKINS COVE?  The City of Annapolis owns the landward side of the property.

WHAT DOES HAWKINS COVE LOOK LIKE?  The landward side of the property is an open area mostly covered in weeds, shrubs, invasive (non-native) plants, and trees choked by ivy.  Behind this area is a paved driveway that leads to a pump station.   The driveway is adjacent to a steep slope incised by a ravine with a creek that empties to Hawkins Cove. A previous ravine restoration project included a series of step pools constructed of sand, rock, and other natural materials and plants.

The seaward side of the Cove is clogged with sediment rendering the area unusable for launching canoes, kayaks, and paddleboards and the existing mooring poles are inaccessible. The existing bulkhead and dock are deteriorating. Shoreline plants and habitat for fish, waterfowl and other animals no longer exist.  Invasive, non-native plant species rim the edges of the cove.  The sediment and invasive plants have killed off the natural aquatic vegetation that is important to water quality and as a food source for animals, and is used by young aquatic animals to hide from predators.

HOW IS HAWKINS COVE USED NOW?  Since the property is in a degraded condition, its primary use is as a cut through between Eastport and Primrose Road for pedestrians and runners who wish to access the trails and other amenities of Truxtun Park.   The dock is unsafe, the mooring poles cannot be used by boats, the area cannot be used safely for recreation, and the property is unappealing for quiet enjoyment.

WHAT IS THE CITY PLANNING AND WHY? Hawkins Cove is a hidden gem with potential to be a beautiful and useful community area providing pollution protection to Spa Creek, the Severn River, and the Chesapeake Bay.  Currently, it is inaccessible, unhealthy, and unappealing.  So, the City is planning a project to restore this property in a way that reflects the needs and desires of Annapolis residents, particularly the communities surrounding the property. The objectives of the project are to create a healthy natural area, including a resilient shoreline protected from erosion, reduce pollution entering the Cove, AND create a usable, attractive, and safe public space.  The final project will reflect community ideas for the property.

WHAT ARE THE COMMUNITY USE OPTIONS FOR HAWKINS COVE?  Nothing will be decided until the City receives input from the community during the City’s community listening sessions.  This input will frame the design of the community amenities and the natural features.  Potential ideas include: provide access for shoreline fishing, wading, and launching of kayaks and other non-motorized watercraft by removing the failing bulkhead and excess sediment and improving the shoreline, provide tie up for small watercraft, including a water taxi, rebuild the dock for fishing and wading, provide shoreside seating and/or picnic tables, provide an open area for recreational activities, and improve the marking, safety, and utility of existing trails, including a connection to Truxtun Park.

WHAT ARE THE OPTIONS TO IMPROVE THE NATURAL FEATURES OF HAWKINS COVE?  The natural features will be designed around the desired community uses of the property.  The improvements will create cleaner water by reducing shoreline erosion, trapping and filtering pollutants, and absorbing and slowing stormwater.   Improvements may include clearing the area of invasive species and debris and replanting with native plants and trees that will thrive in the site conditions, buffering the shoreline from wave action and stormwater erosion with rock and natural materials, and recreating habitat for fish, crabs, snails, birds, otters, and other animals. Shoreline habitats serve as critical nurseries for young aquatic animals and as nesting sites for birds and other animals.

WHAT IS THE TIMING OF THE PROJECT? The City of Annapolis plans to design the project during the spring of 2021 and complete the project by spring of 2022. The first step is to solicit community ideas to incorporate into a project proposal, then obtain funding, followed by design and permitting, and the final step is construction of the project.

HOW CAN I HAVE A SAY IN THE FUTURE OF HAWKINS COVE?  The City of Annapolis is conducting virtual community listening sessions with residents, homeowners’ associations, property managers, and stakeholder groups during the first two weeks of February 2021.  This information will be summarized and presented at a virtual community meeting on February 17 at 7 p.m.  Once a project proposal is developed, the City will continue to seek public input.

Contact the City of Annapolis with your ideas and for more information: