The 25th annual Great Backyard Bird Count (GBBC) is a free, fun, and easy event that engages bird watchers of all ages and levels in counting birds to create a real-time snapshot of bird populations. Participation is a great way for local groups to help their communities gain or maintain recognition as a Bird City.

Participants are asked to count birds for as little as 15 minutes (or as long as they wish) between Feb. 18-21. Log your count at: www.birdcount.org and explore real-time maps and charts that show what others are reporting. Annapolis is a certified Bird City, dedicated to enhancing habitat and connecting people with nature. 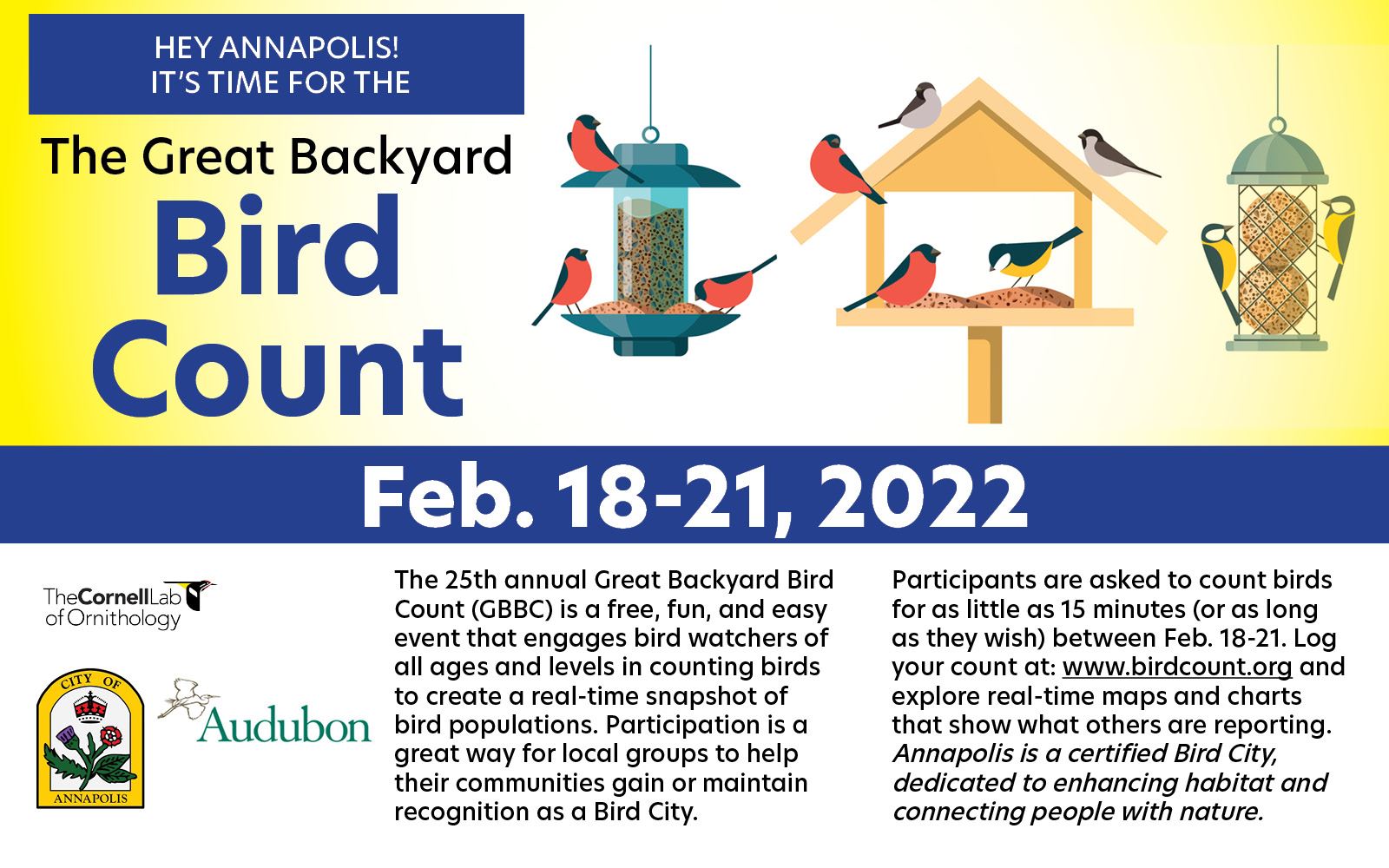 In February 2020, the City of Annapolis earned and was awarded Bird City Maryland status from the Maryland Bird Conservation Partnership. The designation is a recognition of Annapolis’s success in enhancing the city’s environment for birds and educating the public about the interactions between birds and people and about the contributions birds make to a healthy community. In addition, Annapolis is the first Bird City Maryland to achieve “High Flyer” status, which requires completion of criteria above and beyond the entry level Bird City criteria.

Migration is when animals move on a regular cycle and when they travel long distances in search of a new habitat. Migratory birds fly away from their homes every year. The main reasons they migrate to new areas are for food and weather. Because of cold weather during the winter season and shortage of food, birds move to warmer places with plenty of sources of food. There are some birds that fly away from home also to give birth to their young ones in a safe environment. Many birds migrate, such as geese and storks (http://kinooze.com/migratory-birds/).

Migratory birds never get lost during their travel. To sense direction, birds use the position of the sun, visual landmarks, and environmental smells.

For bird enthusiasts, fall’s big event is spying birds as they pass through on migration. In North America, most bird species migrate to some extent. Early May and October are the perfect times to spot migrating birds.

According to the US Fish & Wildlife Service, loss of migratory bird habitat, whether through degradation or fragmentation of habitat, is potentially the largest individual threat to migratory birds. Much of this habitat loss is caused by human activity encroaching on bird habitat.

Birds need essential resources for breeding, feeding, shelter, and survival, including access to food, water, and nesting sites. Quality habitat is extremely important during breeding season, when many birds nest in trees, shrubs, on the ground, or on rocks and rely on nearby resources to raise healthy young. If that habitat is destroyed or disturbed during the breeding season, nests may be lost or abandoned. Loss and degradation of quality bird habitat can lead to population declines at a local and national scale.

It is increasingly important to identify, conserve, and protect important bird habitats. Exacerbating these problems are the effects of a changing climate. Climate change is affecting the availability of resources needed by migratory bird survival.

What are some solutions?

According to the US Fish & Wildlife Service, because habitat resources are essential to the health and survival of migratory birds and their young, protecting habitats that birds use throughout their annual cycle, and minimizing threats within those habitats, is critical to ensuring healthy and sustainable bird populations as a whole.

Sometimes loss of important habitats cannot be avoided. When this happens, one option is to create habitat elsewhere that will benefit the affected bird species, reducing the effects of the lost habitat. There are also some very simple vegetation management measures that landscapers and others can follow to preserve important nesting habitat during the breeding season, and restore native vegetation that many birds use and depend upon.